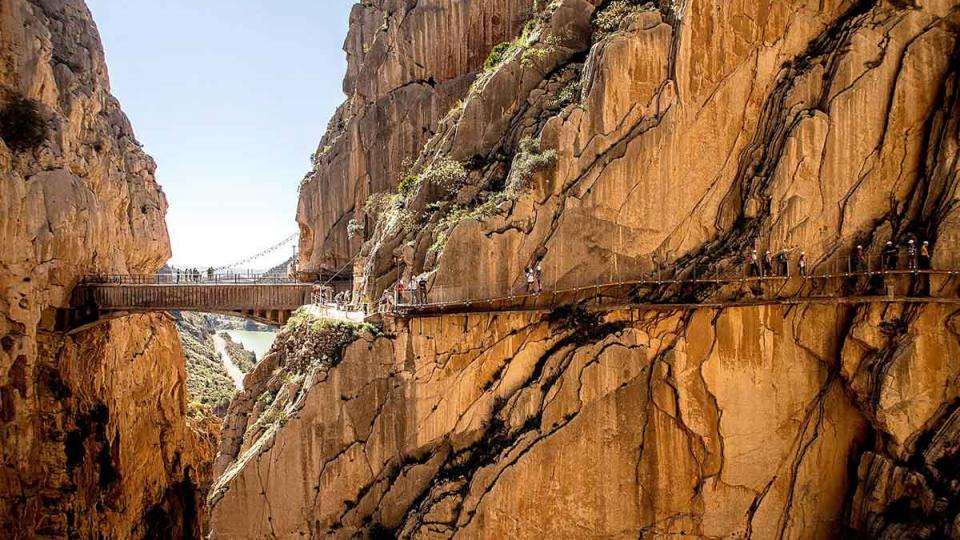 The walkway was originally built to provide workers at the hydroelectric power plants at Chorro Falls and Gaitanejo Falls with a means to cross between them and transport materials, and to help facilitate inspection and maintenance of the channel. The construction began in 1901 and was finished in 1905. King Alfonso XIII crossed the walkway in 1921 for the inauguration of the dam Conde del Guadalhorce, and it became known by its present name. The walkway is 1 metre wide and rises over 100 metres above the river below.

The original path was constructed of concrete and rested on steel rails supported by stanchions built at approximately 45 degrees into the rock face. It deteriorated over the years, and there were numerous sections where part or all of the concrete top had eroded and collapsed leaving large open-air gaps bridged only by narrow steel beams or other supports. Only a few of the original handrails were still in place although a safety wire ran the length of the path. This attracted climbers and adrenalin junkies from all over the world until several people lost their lives on the walkway and, after two fatal accidents in 1999 and 2000, the local government closed both entrances. Even so, in the 4 years leading up to 2013, four people died attempting to climb the gorge.

The new pathway has been making headlines across the world, with Lonely Planet recently nominating a walk along the Caminito as “one of the hottest things to do in 2015”.

The regional government of Andalusia and the local government of Málaga agreed in June 2011 to share the €9 million cost of restoration (including car parking and a museum). The project took approximately three years to complete. Many of the original features were kept.

As you walk the spectacular 7.7km north to south pathway from the Conde de Guadalhorce resevoir to its end at El Chorro dam, with amazing views 100 metres down into the gorge (not for vértigo sufferers) and out across the beautiful Andalusian countryside you may see anything from Golden Eagles and Griffon Vultures to Mountain Goats and Foxes.

The Caminito has even made a cameo appearance in the movie Von Ryan’s Express, and some of the deterioration is directly attributable to the crashing of planes into the cliffs during the filming!